The Outline represents an impressive addition to Kolink´s category of high-performance cases, one that manages to offer as much in terms of design as it does in functionality. The spacious interior fits up to a high-end SSI-EEB motherboard and graphics cards up to 360 mm in length. The cards can also be installed vertically, providing they are dual slot width, using the supplied mount and a PCI-E riser cable (sold separately). It goes without saying that the case offers plenty of room for all your cooling needs: the front supports a radiator up to 360 mm and the roof supports a 240 mm radiator. What really stands out however is the design of its front panel: on the left are functional but attractive air inlets in a checkerboard pattern, on the right is a digitally addressable RGB-LED strip in the form of a narrow rectangle. A pre-installed high-performance 120 mm ARGB fan illuminates the interior of this deceptively large Midi-Tower, meaning that excellent cooling is a given. A tempered glass side panel allows users to enjoy an unobstructed view of the installed hardware.

The Features of the Kolink Outline Midi-Tower at a Glance:

- Stylish Midi-Tower for motherboards up to SSI-EEB format

- Tempered glass side panel for a clear view of the interior

Plenty of Space for Gaming Hardware in the Kolink Outline

Even if the outside of the case corresponds to the dimensions of a Midi-Tower, the Kolink Outline manages to provide support for motherboards up to the SSI-EEB format. Even graphics cards up to 360 mm will fit, thanks to the amount of room available behind the front panel. Even large CPU coolers up to 162 mm in height will fit with ease. A shroud helpfully conceals the power supply and the HDD cage, in which users can either install two 3.5“- or two 2.5“ drives. The rear of the motherboard allows for two 2.5“ SSDs to be installed.

Those preferring to opt for air cooling will appreciate the number of mounting points present for 120 mm fans. The roof supports two 120 mm fans. It is also equipped with a handy mesh, which allows air to flow through the case, without excess dust thanks to the presence of a dust filter. The result is that this is a large, attractive yet low-maintenance case. If that’s still not enough cooling, the front supports up to three 120 mm fans. The slot at the rear is occupied by a 120 mm fan. The pre-installed fan is equipped with digitally addressable RGB-LED lighting. Of course, users are free to install radiators instead of fans if needed, with a 240 mm radiator in the roof and a 360 mm at the front.

Tempered Glass and RGB-LEDs to Put Your Hardware On Show

The power supply cover provides a tidy look inside the case. Well-placed feedthroughs and cable guides allow for sophisticated cable management. The eye-catching strip on the front of the case is equipped with digitally addressable RGB LEDs, the lighting of which can be controlled via a switch on the I/O panel, or the strip can be connected directly to a motherboard and controlled directly via the board instead.

The lighting on the pre-installed fan is also done via a compatible 3-pin connector (5VDG), which can also be controlled via the controller on the I/O panel or via the motherboard. The RGB switch on the I/O panel can also double up as a reset button. In addition to the RGB/Reset switch, there are one USB 3.0 and two USB 2.0 slots as well as 3.5 millimetre sockets for headphones and microphone, a power LED and an HDD LED. 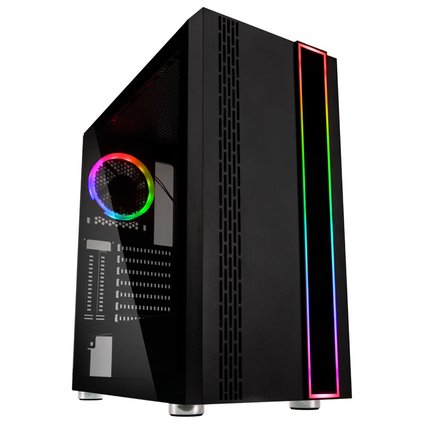